Breakthrough released their first teaser clip from the new EP. The clip features PJ writing a guitar solo while writing session videos play in the foreground. Check out the clip in the video below.

Just in case anyone missed it, we have a short update for you. Now that Backyard Bash is over and our summer schedule nears its end, we are diving back into the writing process for this new project. In a little over 5 weeks, we head back into The Library Recording Studio to work with the wonderfully talented Matt Patrick. Matt is the wizard behind The Highest Praise. The finishing touches were his. We're already extremely excited to share this new music with you. The writing 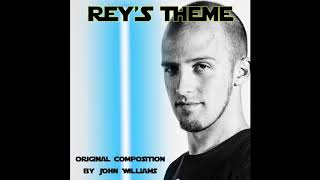 In honor of Force Friday 2017, PJ released his rock cover of Rey's Theme from Star Wars: The Force Awakens. Rey's Theme was originally written by famed composer John Williams. Williams composed the iconic scores for Star Wars, Jurassic Park, Indiana Jones, and countless other movies. Why Rey's Theme and not one of the classic Star Wars Themes? "I chose to cover Rey's Theme for a couple of reasons. One of them being that I have a daughter who loves Star Wars. She looks up to t